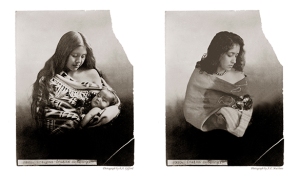 Via Jill Enfield, I came across the work of Annu Palakunnathu Matthew, who makes beautiful work with reconstructions of old photographs, sometimes in oratone. Enfield was giving a lecture for B and H Photography about her own work in using old chemical darkroom techniques to make pictures. She offered examples of the work of others and Annu Palakunnathu Matthew was among the many names. Her work stood out for me, however, for several reasons. Matthew plays with layers and animations of people slowly superimposed over their younger selves. She also takes old photographs and superimposes herself into them and puts them side by side. The beauty is in the content of the image, but also in the oratone itself (oratone being a collodion image, on glass, backed with gold); it’s in the gentleness of the old monochrome images; and in the expression of the passage of time which the digital reworkings – as stills and animation – offer the viewer. Here, the gentle collision of ages in the slow animations annihilates the times between each image. Time passes far too quickly. All too soon we are changed. And gone. We are all history… Time in photographs, however, is static: it shows us what we can never actually have, as Barthes notes in Camera Lucida: ‘What the Photograph reproduces to infinity has occurred only once: the Photograph mechanically repeats what could never be repeated existentially’ (2000: 4). Matthew’s reiterations are phantoms of moments that are unrepeatable, but like performances, they exist as if iterated for the first time, existing forever in that uncanny performance limbo of being simultaneously real and unreal.

Matthew’s work explores time but also identity and ‘otherness’: she says in her artist’s statement:

As an immigrant, I am often questioned about where I am “really from.” When I say that I am Indian, I often have to clarify that I am an Indian from India. Not an American-Indian, but rather an Indian-American, South-Asian Indian or even an Indian-Indian.

Time, traced back in the images, takes us to when identity was firmly placed as geographical, and if it was different it was ‘other’ and ‘difficult’: in her images, she plays the roles her interlocutors expect of her; she becomes ‘really from’ elsewhere. She thus plays with expectation, but with humour and sadness. Her work mixes cross-dressing; cross-time; cross-generations; and cross-processes. Her use of old methods combined with digital forms undercuts it all as if to say: everything is, in any case, a mish-mash of old and new; old and young; male and female; here and there; centre and other. Everything is postmodern. Everything is iterated and reiterated, and not necessarily in that order.

Matthew’s work is inspirational because in it I find combined several themes to which I myself keep returning. I am a digital photographer, but I collect old photographs and make new images and animations with them.

I have a box of old portraits of people whose names and identities are most likely forever lost, and this sense of lost identity I find fertile ground. I’ve spent hours digitally restoring some of these images, during which time there’s been plenty of thinking about these forgotten people as I restore eyes, mouths, dresses, fingers… I pondered on what their names might have been. In most cases, there is no way of ever knowing.

I’ve used some of these photographs to make images and animations for theatre projection, and I’ve had faint stirrings of ethical problems with this: I have therefore (I think), never made an animation that disrespects the images or the people in them. I photographed Victorian grave stones once in Whitby for another project and had similar ethical stirrings. Since the stones in one field seemed to be separated from the land (and bodies) where they’d originally stood, here were memories of people who were present in stone name only, and the stones themselves were eroding in the rain, names melting away, one stone molecule at a time. The old photographs of people became for me, at that point, like these old grave stones: I imagined a field of silver people standing like stones… There’s a picture I’ve still to make, exploring presence and absence and faces without names… This is an image personifying (literally, in the anonymous silent silver people) Sontag’s and Barthes’s notion of death in the image: “All photographs are memento mori,’ Sontag writes in On Photography, ‘To take a photograph is to participate in a person’s (or a thing’s) mortality, vulnerability, mutability’ (1979: 15). And Barthes: ‘Photography is a kind of primitive theatre, a kind of Tableau Vivant, a figuration of the motionless and made-up face beneath which we see the dead’ (2000: 32). 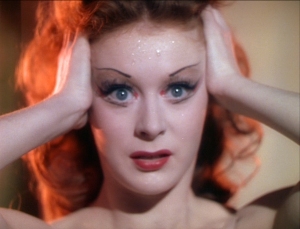 The second theme that interests me is reconstruction. In the autumn of 2013 I staged an exhibition in collaboration with dancer and friend Mark Edward, in which iconic dance images are recreated, not however, by lithe young female ballerinas, but an overweight 40 year old drag queen (he won’t mind me saying that!). The exhibition, Dying Swans and Dragged Up Dames offered themes of fakery, pastiche, ageing and Photoshop. The images were fond and fun rather than pisstakes… We laughed making them. I hope they made people smile as they looked at the made-up faces of the Tableau Vivant we’d made for them.

I quote some of the text I wrote to accompany the images: ‘These are tragi-comedy images:  The tragedy lies in knowing that the dancers we watch will eventually become too past it to dance, the comedy from the bombastic contrast between athletic dance bodies and an aged, overweight one attempting and achieving (thank you Photoshop!) the same balletic feats. This exhibition fondly foregrounds cultural obsessions with youth and Photoshop, and the erasure of age in both live performance – ballet, drag or otherwise – and the digital dark room, where ability and beauty can be airbrushed and ‘improved’.  These are images of old drag ballet queens, flamboyant in the performance of being clapped out and over the hill, but still dancing.’ (Exhibition Notes, Dying Swans and Dragged Up Dames, The Arts Centre, Edge Hill University, Ormskirk, October 2013)

L.P. Hartley’s The Go Between has an excellent first line, perhaps the best first line in a novel ever:

The past is a foreign country: they do things differently there.

I’m interested in historical processes and historical content and the differences (and perhaps the Derridean différances), between then and now: Annu Palakunnathu Mathew demonstrates that this is not wholly a retrospective process, but that there are new artifacts to be made with historical things. They do do things differently, alternatively, in the past, and as Harold Davis notes, they often did things in the past long before we thought of (re)doing them: the first HDR print, he claims, was The Great Wave, made in 1857 by Gustav Le Grey… (2012: 16). So the old adage of there being nothing new under the sun probably holds true. We do things again; we do things differently, différantly; sometimes consciously, sometimes unconsciously; we remake the old to make something new…