When I’m not holding a camera up to a car windscreen, I’m opening its shutter on a bulb setting onto lights in the night from a standing position. It only takes a few in and out breaths to write light onto the sensor, so now I write things in the air with the lens, and then when I want to move to something else I cover the lens momentarily and set up again.

And whilst it’s all about chance and not knowing what will come out, the more I do this, the more I can control the effect because I can sort of predict what might happen and adjust accordingly.

The image at the top of this post, Alastair on the Hill, is not a Photoshop blend: the city lights were drawn onto the sensor, then a strobe was deployed onto the figure while the shutter was still open. The other images above are, however, straight out of camera. At the time I took them and first looked at them, I was blown away. I’d found a new thing to do with the camera. Now they look unfinished: now that the initial joyful ludic impulse has been satisfied, images like this are raw material photographs to blend in Photoshop layers.

The images below are some of the ones I’ve been experimenting with over Christmas, the season of darkness and fairy lights. This has to be done in darkness bar the lights that will be the ‘pencils’, to steal Fox Talbot’s metaphor, because any stray light will smudge and begin to print the room features onto the sensor. I wait till everyone’s gone to bed. Then, it’s easy to spend time into the small hours filling a camera card with photograph after photograph of lights drawn over the sensor by the action of moving the camera around when the shutter is open. It mystifies the cat.

Burn, above, and the images below are layered and blended so that I have some artistic control over a final outcome. I play with different lenses and different focal lengths. I shift focal lengths on the zoom lenses during the shot. I spin. I wave the camera. I write my name in the air…

All of these images were made in Photoshop using the same photographs but in different combinations. In this sense, the aleatory aspect of the work continues in Photoshop, since I cannot anticipate the outcome, I can only experiment and see how things turn out. I love this phase because it has a zen sense of now. There is no before or after. Bayles and Orland write that, ‘Art is like beginning a sentence before you know its ending’ (1993: 20). Here, the work isn’t finished, to paraphrase Leonardo da Vinci, it is abandoned. 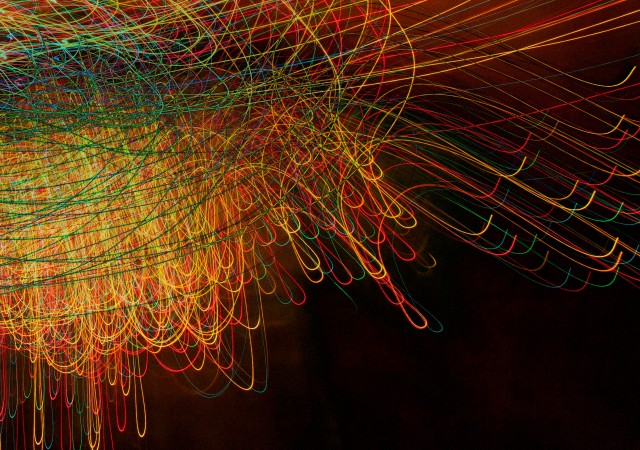 Chandelier is at least two photographs blended together. The final image is then tightly cropped in to make a composition out of the flow of the light streaks. It’s hard to compose in camera because it’s difficult to judge where the light streaks will end up on the sensor. 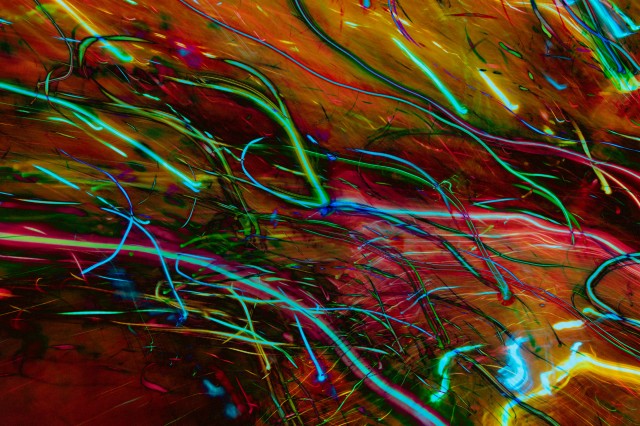 Flash is a blend of a close up and a long shot. It’s almost the same blended image as Pale, but with different blending modes applied.

I like symmetry, although I acknowledge there can be nothing more pleasing than a pattern disrupted. Blue Orchid was made by repeating layers over themselves and blending them through so that the architecture created by the light is repeated. Colours were adjusted in a Hue and Saturation Adjustment Layer and in Curves. I like glowing colours against darkness: it’s what it looks like inside a head full of synaesthesia.

These images feel finished, but my plan is that they are the raw material for a further process of integration with the silver people of the old photographs. They may end up as animations, or as stills, maybe both…